Peter Diamandis on incentive prizes driving an era of abundance 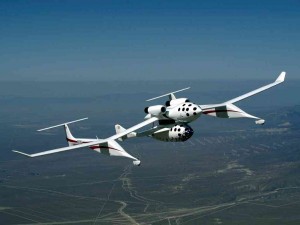 SpaceShipOne, the first private craft capable of ascending to 100km above the Earth’s surface, was the winner of an incentive competition by Diamandis’ XPRIZE Foundation.

Over the last 100 years, mankind has benefited from unprecedented exponential leaps in technology – and with the increasing use of incentive prizes to drive these radical breakthroughs, we can look forward to an era of abundance in the years to come.

This was the message delivered by Peter Diamandis, founder of the XPRIZE Foundation, and co-founder of Singularity University, in a special lecture for Beedie School of Business students and faculty at the Segal Graduate School on Monday April 14.

As the world experiences a period of rapid growth in areas such as 3D printing, robotics and computer processing power, these advances will benefit communities around the world in solving problems such as hunger and drought. Diamandis cited several examples of rapid growth to illustrate these exponential advances, such as the recent $2 billion acquisition by Facebook of Occulus VR – a company that two years ago was launching a Kickstarter campaign to raise initial funds.

“It is predicted that in ten years’ time, 40 percent of the Future 500 companies will be those who do not currently exist,” he says. “The scale at which you can create wealth and change is incredible.”

With such incredible advances in technology occurring all the time, Diamandis is a proponent of crowd sourcing and incentivizing to drive the process.

As such, his XPRIZE Foundation designs and launches large incentive competitions to drive radical breakthroughs for the benefit of humanity – with its most famous outcome so far undoubtedly the venture that resulted in spaceflight no longer being the exclusive realm of governments, SpaceShipOne.

Having dreamt of becoming an astronaut since he was a child, Diamandis used incentive prizes to inspire a private team to build and launch a spacecraft capable of ascending to 100km above the Earth’s surface. The technology has ultimately proven to be the basis for commercial space travel packages offered by Virgin.

Diamandis has set his sights on inspiring some ambitious breakthroughs – ones that could be widely deemed impossible. He has launched competitions to develop open source software that can take a child from illiteracy to reading, writing and numeracy coding within two years, as well as to develop a product that can capture the CO2 from a smoke stack and turn it into a valuable product that is economically viable.

“I believe any challenge can be attacked with an incentive prize,” he says. “We recently launched a competition to build a handheld tricorder that can diagnose illnesses. We had 33 teams from around the world enter it. The beauty of it is that I don’t need to know who they are. I don’t need to know whether they are qualified. They just have to do it.”