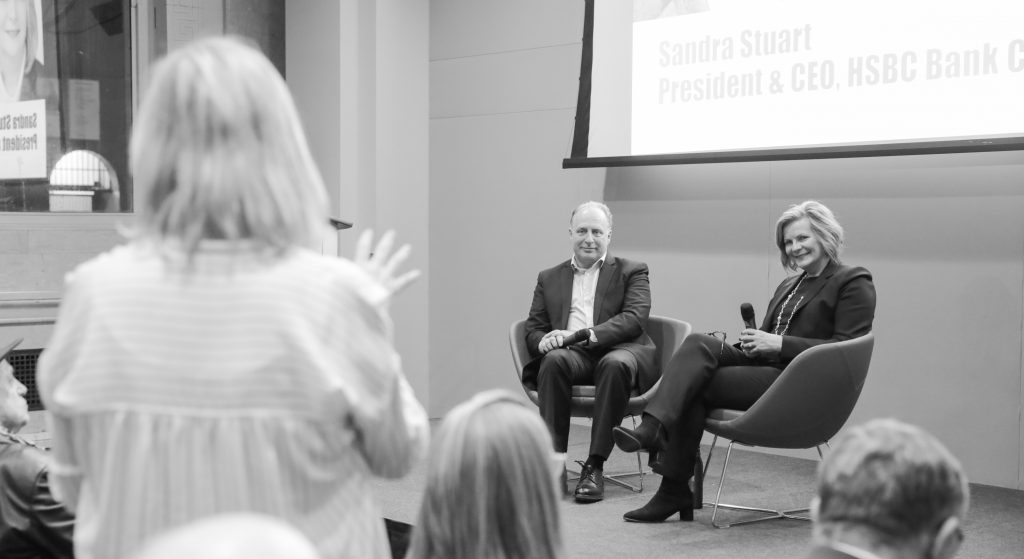 Sandra Stuart, President and CEO of HSBC Canada, spoke on diversity and inclusion at an SFU Beedie Talks event on January 22, 2020.

Sandra Stuart (BA ’16), HSBC Canada’s President and CEO, can point to the experience that inspired her to fight for greater diversity and inclusion at the bank.

“It was when I went to Brazil, and I recognised the challenges faced by women,” she says. “I was one of the few senior women—there was me and another lady, that was it. And it just struck me like a bolt of lightning: ‘This isn’t right’.”

Stuart worked for HSBC in Brazil from 1999 to 2001, and the experience changed her perspectives in other ways as well. Working in a country with an unfamiliar language and culture, she felt the challenge of succeeding as an outsider. She also saw the lack of opportunities available to women in a country where they did not enjoy equal access to education.

“That’s when I really recognised that inclusion was important, that speaking out on women’s behalf was important and being part of the change in whatever capacity I could be with the bank,” she says.

HSBC Canada’s board of directors boasted 30% female representation in 2011, when Stuart was appointed to its ranks—already a standout figure for the industry. As diversity champion for the bank, Stuart set about implementing the changes that would ensure they achieved gender parity in both the board and the leadership team by 2013. They have maintained gender parity ever since.

The board achieved this, in large part, by setting clear targets to promote more women to board positions. But Stuart says that top-down targets alone are not enough: real change requires a shift in culture throughout the organization. “I can make decisions and set targets,” she says. “They’re meaningless unless your team buys into them.”

The goal now is to ensure gender balance at every level, starting with graduates embarking on their careers with the bank. “The whole pipeline starts right when you recruit on campus,” says Stuart.

Stuart is proud of the strides they have made at HSBC Canada, but she is clearly impatient to see more progress in the wider business world. “It’s getting better, but it’s so slow. I don’t like that it’s taking so long; it’s frustrating,” she says. “It’s got to really get some momentum; it’s got to get a whole movement behind it. So that’s why I’m quite vocal about it.”