We're in the process of moving this section to our new website. Check out the new SFU Beedie website →
Beedie School of Business > Ideas@Beedie > Executive MBA student fought back from a near-fatal accident to complete his degree 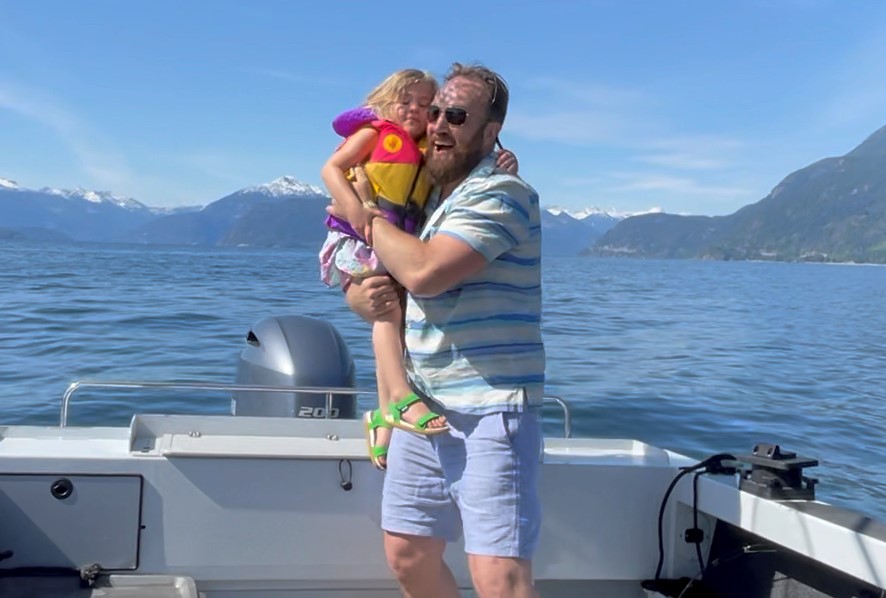 Erik Brinkman, pictured with daughter Zelly, survived a four-storey fall on his honeymoon that left him with serious injuries, requiring 16 surgeries. He is collecting his Executive Master of Business Administration degree from the Beedie School of Business.

Everyone receiving their degree at the June 2021 convocation will have their own stories of challenges overcome, but few can be as dramatic as that of Erik Brinkman, who will collect his Executive Master of Business Administration (EMBA) degree from the Beedie School of Business at the ceremony.

In February 2019, halfway through his second semester of the program, Brinkman and his wife travelled to Cancun, Mexico, for their honeymoon. On the first night, a tropical rainstorm rolled in and Brinkman, walking on an uncovered balcony, slipped on the wet marble floor and fell over a low railing to the ground, four floors below.

His injuries were catastrophic. Landing on his feet, the force of the impact travelled up through his legs, shattering bones; both feet, kneecaps, femurs, hips, and his pelvis, spine and left elbow all suffered severe breaks. First responders and doctors doubted he would survive. Crucially, though, his vital organs remained intact.

In hospital in Mexico, the next challenge Brinkman faced was a lack of supplies of his blood type – O negative – that he desperately needed to survive. Faced with this, his family and his cohort at SFU quickly led a campaign to find anyone with the right blood type who might be nearby and able to donate.

“There were a bunch of blood drives from people at SFU, and the cohort contacted anyone they knew in Mexico to try to donate O negative blood, and the administration supported that,” says Brinkman. “There was a big social media movement with thousands of shares and they announced it on the Mexican radio.”

The campaign led to people who were also in Cancun coming to the hospital to donate enough blood to keep him alive, while family navigated the challenges of hospital fees, insurers and getting him home for treatment in Canada.

Once home, he underwent 16 surgeries to treat his injuries, and the support he had received from the SFU community continued. “A lot of the cohort came to visit me in the hospital, which was quite touching, and Carolyn [Egri, academic director of the EMBA program at the time] actually came to visit me in the hospital too,” says Brinkman. “The administration was very supportive of my medical situation.”

Though he was initially eager to get back to his studies after just a semester off, Egri reassured him he could join the following year’s cohort to complete the program. “Carolyn said, ‘No, no, you need to take time. You need to focus on what’s important, healing, and SFU will support you and be there for you when you’re ready to come back,” he says. “So, I took a year off and then restarted in the same place that I’d left off, with a new cohort.”

That “year off” saw Brinkman slowly rebuild his life, starting in a wheelchair, through months of rehabilitation, physiotherapy and occupational therapy. The concussions he suffered meant he couldn’t read for six months, and he had to manage ongoing symptoms and chronic pain as he returned to his studies, but he was committed to overcoming these challenges. “I wanted to finish what I started and I wanted to not let this accident derail my life completely,” he says. “I had a plan, and I was determined to continue that plan with renewed vigour.”

While the accident, which he refers to as “the great awakening”, took an enormous physical toll on him, it has not dimmed Brinkman’s enthusiasm or determination. When he reflects on how the the event, and subsequent recovery, changed his attitude to his life and studies, he radiates with energy.

“We had a one year old at the time of the great awakening, who’s now three, and who now has a four-month old sister. The combination of everything together makes me overwhelmed with gratitude,” he says. “The miracle to be alive and the joy to be in my children’s lives is indescribable. Learning now feels like a gift and not a burden. I feel so  privileged to have had the opportunity to connect to the cohort of brilliant minds, and the wise, sage prophets, the professors. I felt so grateful to be there.”

Brinkman is now back working with his family business, ecological restoration organization The Brinkman Group, and is fervently applying all the new knowledge from his EMBA journey towards building the future of the family business from a place of gratitude.

“Now I am back to work full time and it feels completely renewed,” he says. “It’s interesting because you can take something that’s totally familiar that you think you know, and you can make it completely new by just changing your perspective and approaching life as a gift.”