We're in the process of moving this section to our new website. Check out the new SFU Beedie website →
Beedie School of Business > Ideas@Beedie > SFU Beedie alumnus Amanda Chor on a mission to embed sustainability into corporate culture and communities 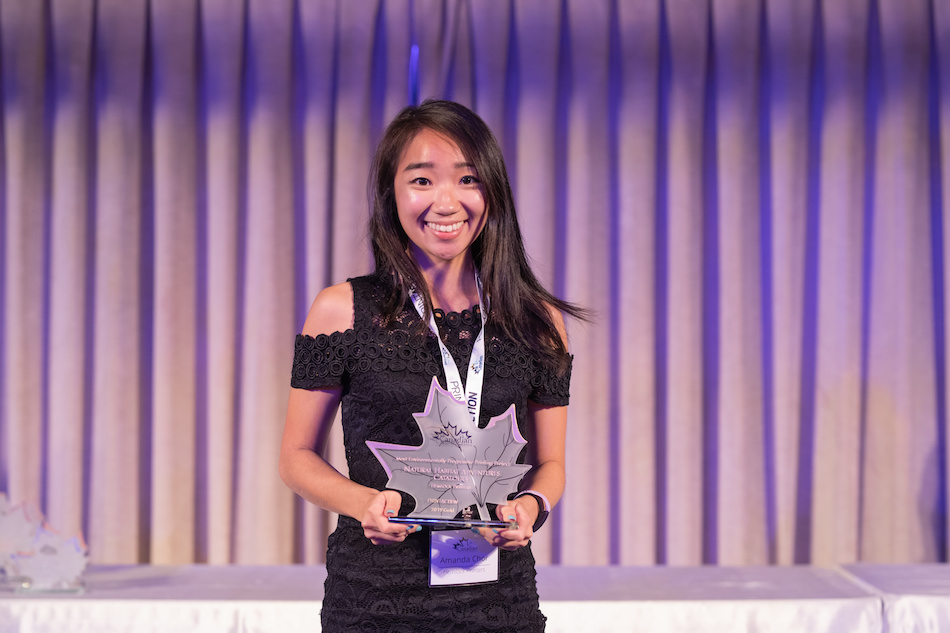 Amanda Chor at an awards ceremony for Hemlock Printers recognizing the commercial printer for its achievements in sustainability.

When Amanda Chor saw that SFU offers sustainability-focused business courses, she decided to embark on SFU Beedie’s Corporate, Environmental and Social Sustainability (CES) certificate program, anticipating that its courses would be interesting and helpful for learning new perspectives.

What she did not expect, however, was for the program to kickstart a passion for sustainability that would bolster her career and give her a personal mission. Now, Chor is the sustainability manager for one of the most environmentally progressive commercial printers in North America and the only Green-e certified printer in Canada.

“When I found out about the CES certificate program at SFU Beedie, I was interested,” says Chor. “But it wasn’t until I started taking my upper-level business sustainability courses that I realized there are actual jobs in sustainability.”

Having graduated in 2018 with a concentration in management information systems and a focus on project management and human resources, Chor completed the CES certificate and credits the program with shifting her focus to a career in sustainability.

She counts the program’s sustainability courses among her favourites and describes one course as particularly engaging—Susan Todd’s course on sustainable operations (BUS 475), which had speakers coming in from all kinds of different industries to educate the class on environmental topics and a class project requiring the students to research and recommend ways in which a company could embed sustainability into their business.

Hemlock Printers was the business of focus for the class project in which Chor participated, and the CEO of Hemlock Printers later approached Chor about hiring the organization’s first full-time sustainability coordinator. Chor joined the Hemlock team in 2019 and has since been promoted to a leadership position where she manages the company’s sustainability portfolio and showcases their sustainability journey.

“As a member of the leadership team, I’m actively involved in launching carbon emission reduction projects,” says Chor. “This means reducing Hemlock’s waste, discovering low carbon opportunities by collaborating with different stakeholders, and managing the environmental aspects of paper procurement as it’s such an integral part of our supply chain.”

Chor holds her volunteer experiences at SFU Beedie in high regard as learning opportunities that helped her develop transferable skills.  She was heavily involved with the Business Administration Student Society’s mentorship program, serving as a mentor for three years, and has since been invited back to speak as an industry professional.

She also joined Enactus and was involved with two major programs: Hunger Actions, a comprehensive four-week program that helped single mothers living in poverty learn financial budgeting and how to cook healthy meals; and Banner Bags, a program that helped students repurpose waste into tote bags and learn about the environmental challenges of the textile industry.

“I want to educate and inspire the next generation to be sustainable changemakers,” says Chor. “I see my professor Susan Todd doing just that—inspiring students such as myself. Sustainability is not limited to only specific fields—it’s beyond business. Everyone has a role in sustainability.”