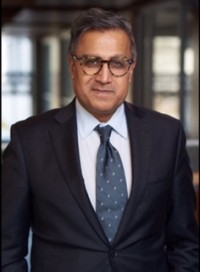 Shafik teaches commercial law, business ethics and employment law courses.  He has a keen interest in student engagement in his courses and tries to bring his real world legal experiences in class to assist students in understanding the subjects he teaches.

Shafik is a two-time recipient of the TD Canada Trust Distinguished Teaching Award, the highest teaching honour at SFU’s Beedie School of Business. In 2013 and 2018, Shafik was chosen by the Teaching Awards Committee for this honour. The terms of the Award  allow a previous winner to be eligible after a 4 year break.

Shafik is also a member of the Law Society of British Columbia and a former partner of Kornfeld LLP (2000 to 2016) and, since May 2016, Associate Counsel with the same firm.  Shafik's practice is focused in the areas of corporate commercial litigation, general civil litigation, labour and employment law and Human Right Law.

Born in Dar-es-Salaam, Tanzania, Shafik completed an Honours B.A. at Simon Fraser University and received his law degree from the University of British Columbia in 1989. In 2004, Shafik obtained his Masters of Law degree with a focus on e-Business from Osgoode Hall Law School.

Shafik has acted on litigation of multi-party commercial/corporate and securities cases. He has also prosecuted and defended personal injury claims, fire and casualty claims, breaches of sale of goods, as well as real estate contracts and negligence claims against insurance and real estate companies, agents and brokers.

In his labour and employment practice, Shafik has represented numerous large and small companies in labour relations matters including grievances, collective bargaining, certification applications and employment terminations. He appears before the Labour Relations Board in certification applications and unfair labour practice complaints, and before the Supreme Court of British Columbia on wrongful dismissal matters. Shafik also appears before the Human Rights Tribunal in employment discrimination cases.

Shafik has obtained certification in mediation and has participated as counsel in mediations involving commercial, insurance, labour and employment disputes.

Shafik has lectured on various legal topics including non-competition covenants in business and employment contracts and prepared  and presented materials for various business organizations including the Vancouver Board of Trade.

Shafik has also authored several academic articles in law and ethics journals, some of which are listed below.

Shafik also acts as an adjudicator on the Employment Standards Tribunal, an appointment he has held since 2009. He has authored over 300 decisions as aTribunal member.

Shafik is also a Director and Co-Chair on the West Vancouver Police Board and Chairs the Human Resources and Policy and Procedure committees.