We're in the process of moving this section to our new website. Check out the new SFU Beedie website →
Beedie School of Business > Ideas@Beedie > Seven SFU Beedie alumni honoured in Business in Vancouver 2018 Forty Under 40 Awards 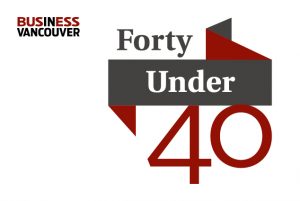 Seven Beedie School of Business alumni were among the winners of Business in Vancouver magazine’s 2018 Forty under 40 Awards. The seven SFU Beedie alumni honoured with awards are Benjamin Britton, Josh Carr-Hilton, Graham Collings, Matias Marquez, Kylie McMullan, Dianne Sparrow and Denise Williams. The award recipients are from a wide range of SFU Beedie’s programs, with the undergraduate BBA, the MBA, Executive EMBA in Indigenous Business and Leadership and Invention to Innovation programs all represented.

The winners will be celebrated at a gala event at the Vancouver Convention Centre on January 24, 2019.

“It is wonderful to see our alumni going on to such great success and receiving recognition from the business community,” says Ali Dastmalchian, SFU Beedie’s Dean. “Our programs are designed to equip our students with the tools they need to thrive in business, and it is enormously encouraging to see them becoming innovative, inspirational business leaders in their respective fields.”

Benjamin Britton is chief strategy officer and vice-president, business development, at Ionomr Innovations Inc, which designs, adapts, and manufactures advanced ion-exchange membranes. Britton was part of the inaugural cohort of Invention to Innovation, a one-year, part-time graduate certificate program designed to provide scientists and engineers with the tools they need to commercialize their inventions.

Josh Carr-Hilton, an alumnus of SFU Beedie’s BBA program, is founder and CEO of The District a Vancouver-based media company. The District develops music sharing communities across major content platforms such as YouTube, Spotify, Apple Music, Facebook and Amazon. Channels, playlists and social communities which make up The District have accumulated over 80 million subscribers and generate over 12 billion streams annually for independent artists, label and major label partners around the world. In 2018 Carr-Hilton was named one of Billboard Magazine’s Power Players.

Graham Collings, who completed the BBA in 2002, is Executive Vice-President, Investments, and Partner at investment fund manager ACM Advisors Ltd. ACM Advisors specializes in the creation, structuring and management of pooled Canadian commercial mortgage funds, and has $2.65 billion in assets under management (as at September 30, 2018).

BBA Alumnus Matias Marquez is President and Chief Executive Officer and a founder of Buyatab Online Inc., which provides online gift card services to leading brands in a wide variety of sectors, including retail and hospitality. Marquez has served in senior leadership roles within the organization since the company’s inception in 2009 and in July 2018 was named President and Chief Executive Officer. Over the years, Marquez has been recognized with numerous awards for his entrepreneurial success, including: being named a BCBusiness Top 30 Under 30 recipient in 2016; winner of the 2016 EY Entrepreneur of The Year award; and being named to Canada’s Top 40 Under 40 for 2017.

Kylie McMullan, an alumnus of SFU Beedie’s Full-Time MBA program, is Principal of marketing and communications consultancy Finch Media. McMullan is also an Instructor of Public Relations for Simon Fraser University and the co-author of the first Canadian-based public relations textbook, Canadian PR for the Real World. She sits on the Young Associates Committee for the Vancouver Art Gallery and on the YWCA Women of Distinction Nomination’s committee.

Dianne Sparrow, who holds an Executive MBA in Indigenous Business and Leadership (EMBA IBL) from SFU Beedie, is Intergovernmental Affairs Manager for the Musqueam First Nation. In this role Sparrow leads research, analysis, policy development and implementation of Musqueam Treaty Policies. She also leads negotiations as part of the Musqueam negotiation team on key aspects of treaties with provincial and federal negotiators, and maintains positive working relationships in a coordinated effort with First Nations, First Nation organizations, NGOs, federal and provincial governments. Sparrow also volunteers as a Community Leader with Indigenous and Northern Affairs Canada, the government department working to made Canada a better place for Indigenous and northern peoples and communities.

Denise Williams, another alumnus of the EMBA IBL program, is Chief Executive Officer of the First Nations Technology Council. This role places Williams at the intersection of Indigenous sovereignty, technological advancement and a rapidly expanding technology and innovation economy. She leads a theory of change that will not only ensure Indigenous peoples are competitive in BC’s technology and innovation sector, but leading and growing local digital economies.

Williams also serves as the President of the Urban Native Youth Association, advisor on innovation to the Governor General of Canada, Status of Women Canada’s Indigenous Women’s Circle, on the board of the First Mile Connectivity Consortium, Vancouver Economic Commission and on the Simon Fraser University Board of Governors as Alumni-in-Order.