We're in the process of moving this section to our new website. Check out the new SFU Beedie website →
Beedie School of Business > Ideas@Beedie > Self-sufficiency the goal of SFU Beedie MBA grad’s work as CEO of Kanaka Bar Indian Band 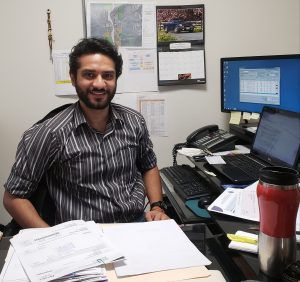 Zain Nayani, CEO of the Kanaka Bar Indian Band, took the job after completing an eight-month internship during his MBA program at the Beedie School of Business.

As more communities seek ways to become more sustainable, they might look for inspiration at a small B.C. First Nations band moving towards self-sufficiency, thanks in part to an SFU Beedie School of Business MBA graduate.

Zain Nayani is the CEO of economic and business development for the Kanaka Bar Indian Band located near Lytton, northeast of Vancouver. The band has about 200 members, with 60 or so living onsite year-round.

“We are trying to prepare the community for the effects of climate change and put in place measures to succeed and achieve self-sufficiency,” says Nayani, who is originally from Pakistan.

First hired in 2012 on an eight-month internship through the MBA program, Nayani, through his company ZN Advisory Services, continues to work with the band on various projects. He initially worked with the band to develop a new governance and financial management system. This set a foundation for the future community vision of achieving self-sufficiency in four areas: energy, food, employment and finance. The next step was to develop and implement a strategic plan for achieving the vision.

“It’s tough to say when we will achieve a state of true self-sufficiency, but we are moving in the right direction,” Nayani says. “It’s rewarding to implement plans, get dirty and make things happen.”

The band is making significant strides towards its vision.

To achieve food security, Kanaka Bar has built community gardens with the goal of producing enough to both feed the community and sell excess to others.

Kanaka Bar is also planning to develop its eco-tourism potential, starting with a rest stop powered by renewable energy on Highway-1 and featuring an EV charging station. The goal is to encourage people to explore the nearby trails and learn about Kanaka as they take a travel break.

“It’s been a rewarding and mutually beneficial experience,” says Nayani. “So much that I learned at SFU has helped me. I’ve been able to share my knowledge, help the band build capacity, and become a trusted member of the community.”

But, he adds with a chuckle, “I’m trying to phase myself out of a job. That’s what I’m passionate about, because it would be another measure of self-sufficiency for the band.” 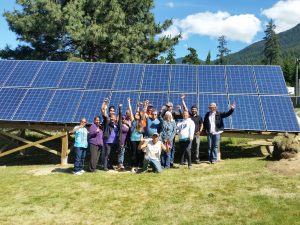 Zain Nayani, second from right at rear, stands with band members at the site of their solar array.