We're in the process of moving this section to our new website. Check out the new SFU Beedie website →
Beedie School of Business > Ideas@Beedie > Students and alumni recognized with awards at BASS Celebration Gala

Students and alumni recognized with awards at BASS Celebration Gala 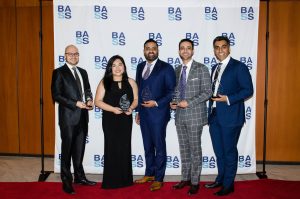 The Business Administration Student Society (BASS) at SFU’s Beedie School of Business honoured outstanding individuals in the SFU Beedie community at the first annual BASS Celebration Gala on April 26, 2018. The event was an innovation of the BASS Executive Council, building on previous years’ events.

“The Business Administration Student Society recognized the need to highlight these achievements on a grander scale, and thus created the BASS Celebration Gala. Inspired by the former BASS Student Awards Gala and BASS Banquet, the first annual BASS Celebration Gala received immense support from all Beedie student organizations and the Beedie student body. Selling out in 72 hours truly demonstrated the impact student leaders have in the Beedie Community.”

Two different types of awards were presented at the event: Impact Awards, which recognize career-long dedication to improving the lives of students, alumni and the Beedie community; and Student Leadership Awards, honouring achievements within the 2017/2018 year.

The  flagship award at the event, the Community Impact Award, was presented to the three co-founders of The Young Entrepreneur Leadership Launchpad (YELL), Amit Sandhu (SFU BBA), Punit Dhillon (SFU BA, Bus Minor) and Rattan Bagga. The award recognizes leaders for excellence, leadership, and innovation in their achievements and contributions to the social, educational, or economic well-being of the Metro Vancouver community. The co-founders of YELL have taken an innovative approach to providing young, aspiring entrepreneurs early access to the principles of entrepreneurship.

The Alumni Impact Award was presented to Carlos Leal, who completed his BBA at SFU Beedie in 2012, and has been an exemplary role model both as a student and as an alumnus. During his studies, he co-founded the SFU Consulting Club, which developed into the current Management Consulting Career Prep program, and has developed connections in the consulting and supported many SFU Beedie students entering the sector. Now a manager at EY, since graduating Carlos has continued to mentor students, volunteer as a judge in case competitions, and sit on numerous boards, both at SFU and beyond.

Current BBA student Deborah Dumagpi won the Student Impact Award, which is awarded to an undergraduate student in recognition of excellence, leadership, and innovation in their achievements and contributions to the social, educational or economic well-being of current Beedie students.

During her time at SFU Beedie, Deborah has shown tireless enthusiasm in giving back to the community. Alongside her studies and work commitments, she has served on the BASS executive team for many years, as a mentor, as Vice President, Events, and finally as President of the organization. She also worked for the SFU Human Resources Student Association, as a Project Manager for the HR Now Conference in 2014, and for AIESEC SFU as Director of Member of Development for 2014.

In addition to the Impact Awards, four Student Leadership Awards were presented at the Celebration Gala. The winners in the four categories were: