We're in the process of moving this section to our new website. Check out the new SFU Beedie website →
Beedie School of Business > Ideas@Beedie > SFU Beedie delivers record-breaking performance at top case competition 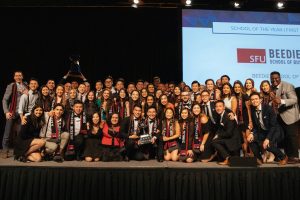 A team of SFU Beedie students competing in this year’s JDC West, Western Canada’s largest and most prestigious business competition, turned in the school’s best-ever performance, winning first place in six of the 13 categories. This success led to the team also winning the prized School of the Year category for only the second time since the competition’s inception in 2006, and Academic School of the Year. These titles are based on the results of the other categories.

“Our students delivered an amazing team effort and we’re so proud of them for growing so much in preparing for the competition,” says Simon Ford, Faculty Advisor to the SFU JDC West team.

“The co-captains were incredibly committed, we had an amazing Executive Team that organized and motivated their competitors, and the team members worked incredibly hard during the Fall to prepare for the competition. They were ably supported by SFU Beedie’s staff and some of our valued alumni, who came back to coach teams and act as judges during the four mock competitions that were organized.”

The event was attended by 600 competitors from 12 business schools along with 600 faculty coaches, observers and corporate partners. SFU Beedie won first place in eight categories, including the prestigious titles of School of the Year and Academic School of the Year, in addition to Athletics, Business Strategy, Debate, Finance, International Business, and Marketing. The team also placed second in the Operations Management and Social categories.

This represents the best performance ever by an SFU Beedie team in the competition. The team was led by co-captains Tom Kadota and Ryan Wong, who were both participating in their fourth JDC West competitions. In addition to coaching from Simon Ford and numerous alumni volunteers, the team was supported by SFU Beedie staff member Paula Broderick as University Advisor, providing guidance on a range of matters including team selection, training scheduling and stakeholder management.

“After four long years, JDC West has taught me some of the most valuable and applicable skills that you could get during university,” says Tom Kadota.

“I’ve never experienced something like JDC West before. It was an absolute honour and privilege to co-lead a 56-person team of the most dedicated, hardworking and intelligent people I know.”

Ryan Wong adds, “JDC West has been the pinnacle of my undergraduate degree. The friends I have made and the experiences we shared have fostered lifelong relationships. Each and every individual on this team exceeded my expectations and I am so grateful to have shared this journey with them.”