We're in the process of moving this section to our new website. Check out the new SFU Beedie website →
Beedie School of Business > Ideas@Beedie > Stepping stones: SFU’s Indigenous Business Leadership EMBA brings Indigenous ways of learning into the business world 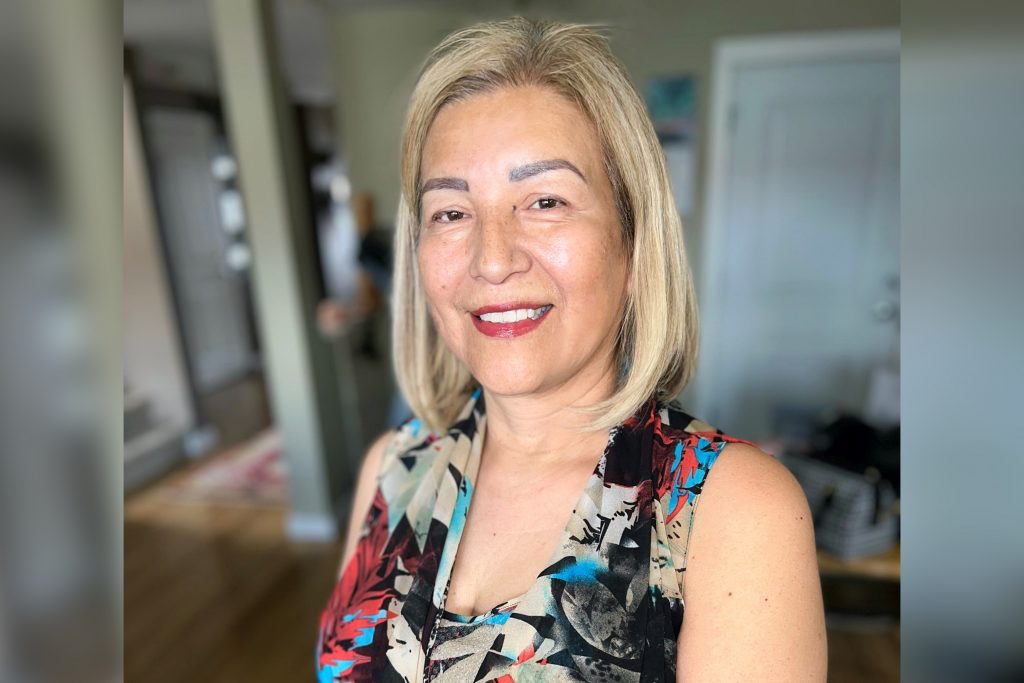 The importance of having Indigenous role models—both for herself and her daughter—is what drew Joanne Stone-Campbell to SFU Beedie’s Indigenous Business Leadership Executive MBA (IBL EMBA) program. Having had negative experiences throughout her school years, she never thought she would have the positive experience that she did in SFU Beedie’s IBL EMBA program—let alone learn from actual Indigenous professors.

Stone-Campbell, who is Anishinaabe, grew up on in an isolated First Nations community in northern Ontario called Michipicoten with a population of around 50. Both her parents had served in leadership roles as elected chiefs of the community. Her father pushed the importance of education, believing that it was the tool to understanding and living in both worlds—the Indigenous and the non-Indigenous. As a result, she was the first in her community to graduate from high school and go on to post-secondary.

“I didn’t have many mentors in the area of education,” says Stone-Campbell. “My father went to residential school and he passed away when he was 51. I wanted to teach my daughter to have role models and to give her some inspiration, too, so that she has stepping stones to follow her own passions and dreams.”

Two values have helped guide Stone-Campbell throughout her life: education and community service. At age 10, she had her own little schoolhouse where she taught kids in her community art, reading and math. With her father’s support and insistence on education, she went on to enrol in Sault College at 17, where she graduated with a diploma in development services. She volunteered as a parole officer at 19 and then was appointed a Justice of the Peace at 20.

Staying true to her values, she came home and took a job at the local college helping adults with disabilities. It was during this time that she took on a second full-time job where she helped build a women’s crisis centre and served as a support worker. Eventually, she went on to work for nearly three decades in education—first Sault College, Vancouver School Board and then at BCIT—while also volunteering as a personal growth facilitator.

With her daughter graduating high-school and going into post-secondary, Stone-Campbell decided to also go back to school. After researching executives’ and VPs’ education, she chose SFU Beedie’s IBL EMBA program. It far exceeded her expectations.

Growing up, Stone-Campbell had very negative school experiences. Students from the reserve frequently encountered racism and bullying. Although she was the first generation of her family to not attend residential school, Stone-Campbell still felt trapped in a traumatic school environment where she faced name-calling and physical assaults daily. Administrators asked her to quit school and get a job in grade 10. She had to fight to graduate in grade 12 along with everyone else. With all the negative experiences in her education, Stone-Campbell surprised herself by going back to school—and she was glad she did.

“Going into this executive MBA with an Indigenous cohort and being able to contribute my own life learning and having people understand me was incredible,” says Stone-Campbell. “Being able to learn from my own people, experiencing their journeys, and learning from Indigenous professors was amazing. I could have cried every day in my class—it was such a healing journey for me through positive education.”

Stone-Campbell was especially glad to have a professor who was also Anishinaabe—Dr. John Borrows. “For him to come into class and share a song, share the language, share the story from my home area, and for him to be Indigenous—it was so impactful,” says Stone-Campbell. “To have one of my people be in such a leadership role, so educated—he was huge in my books.”

Her cohort also took a trip down to the University of Arizona in Tucson, AZ, where they met and studied with more Indigenous professors over an additional six courses. At the end of the program, they received the Certificate of Indigenous Governance along with their MBA degree.

The program gave Stone-Campbell a chance to collaborate with other Indigenous professionals and think about ways to incorporate Indigenous ways of knowing and priorities around reconciliation into business and the world of work.

“They’re Indigenous lawyers, Indigenous executives, Indigenous accountants, and just sharing their wealth of knowledge is what excites me—that Indigenous knowledge,” says Stone-Campbell. “I learned so much about how I can weave this knowledge into my workplace or where I want to go as a leader. How do we bring Indigenous values into our work?”

“I’m looking forward to the next five years of my life and being fully connected, passionate and living each day doing what I love and on purpose,” says Stone-Campbell. “Having an MBA gives you more control of your life and destination, and more opportunity. You don’t have to settle for less.”