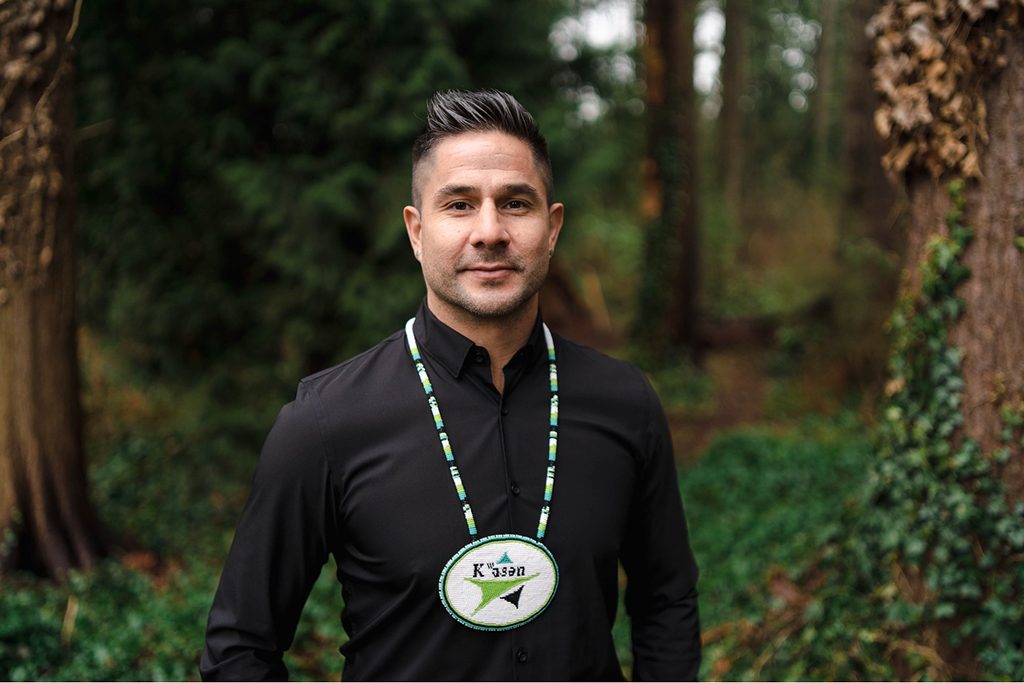 Dennis Thomas will graduate this October from the Indigenous Business Leadership Executive MBA program at SFU’s Beedie School of Business.

Dennis Thomas’s dedication to his Nation started 15 years ago with working in economic development and managing Takaya Tours, an internationally recognized Indigenous tourism business. It was there that he connected with his cultural roots and, today, he is a cultural ambassador in his community who strives to embed his Nation’s culture in all areas of business to keep the ancestral knowledge alive and well.

Thomas, whose ancestral name is Whonoak, is a member and elected Councillor of the Tsleil-Waututh Nation (People of the Inlet) in Deep Cove, North Vancouver. In 2021, he was named among Business in Vancouver’s Top Forty Under 40. Currently, he manages Nation-owned businesses and leads new ventures as a senior business development manager in economic development at Tsleil-Waututh Nation. For the past four years, he has also been a consultant to the Musqueam Squamish Tsleil-Waututh (MST) Development Corporation as a cultural liaison who helps to ensure that Tsleil-Waututh Nation’s history and culture are embedded in modern development, landscapes and building design.

This October, Thomas will graduate from the Indigenous Business Leadership Program at SFU’s Beedie School of Business. Thomas was inspired by some of his mentors who had been in previous cohorts to pursue the IBL EMBA program. Seeking to combine higher education mixed with Western perspectives and Indigenous worldviews with his Indigenous background and work experience, Thomas hopes to continue growing in his career path and commitment to his Nation.

“The whole experience has been so culturally, emotionally and socially rewarding,” says Thomas. “Not only was I able to share the work that I’ve been doing, but also meet new Indigenous professionals across Canada and the U.S. I was able to hear different perspectives and utilize the knowledge I absorbed through the professors and incorporate them into my day-to-day work. It’s been a transformative experience for me—personally and professionally.”

Thomas first began working for his community in 2007 as the Tsleil-Waututh Nation coordinator for the 2010 Vancouver Olympic and Paralympic Winter Games. Since then, his dedication to serving his Nation and community has only grown.

One of the major business ventures Thomas led was the implementation of the largest solar array project to date on the North Shore, a major sustainability project which continues to inspire him to practice and implement green energy. He managed the project to install 350 solar panels on the Tsleil-Waututh administration office, rendering it almost a net zero building.

But “sustainability,” Thomas explains, wasn’t a word that existed in Indigenous cultures, but rather a new, colonial concept that often gets misconstrued. The Indigenous way of thinking about sustainability is one example of the many ways in which Indigenous ways of knowing and being could be integrated into contemporary business knowledge.

“For us, sustainability was honouring and caring for nature and being stewards of the land, sea, marine life, wildlife, and ecology,” says Thomas. “It meant only taking a small amount of what you need and leaving the whole so it can regenerate. That’s the symbiotic relationship we had with nature. We would never clear-cut the whole thing. We always knew that to not be sustainable.”

For Thomas, implementing the solar array project was a way to show the world and the local communities what a small Nation can do using renewable energy to run an energy-efficient administration building.

Thomas also describes the importance of SFU Beedie’s IBL EMBA program and its Indigenous content in the context of Vancouver leading the world in many aspects of reconciliation and partnerships with First Nations and land development. Thomas, who is knowledgeable about Indigenous real estate, explains the three Nations are buying back their traditional territory and transforming the landscape of Vancouver.

“Every cohort of this program will be evolving because there are new things we’re doing right now that have never been done before,” says Thomas. “They should be showcased across Canada, North America and even globally.”

Thomas’s very first course in the IBL EMBA program was with Dr. Dara Kelly, who is from the Leq’á:mel First Nation and part of the Stó:lō Coast Salish, and whose course on wayfinding spoke to the worldviews and cultural values of the Māori. The course resonated with Thomas, who, on top of being a manager of a canoe business, identified personal connections with the Coast Salish ways of canoeing.

“That was a very profound moment in my learning, being able to have that instant connection to course material from a business that I ran,” says Thomas. “The Indigenous courses were very special to me. They really changed my perspectives on how to ground my conversation before I speak, which had a significant impact on my personal growth.”

Other course highlights included Indigenous economies with Dr. Dara Kelly, and Indigenous laws with Anishinaabe and Ojibway professor Dr. John Borrows, an insightful course that speaks to Indigenous stories, legends and histories as the basis for Indigenous laws.

Over the next few years and with the MBA under his belt, Thomas hopes to keep growing in his career and take on new leadership opportunities for Tsleil-Waututh Nation.

“I’m committed and devoted to my Nation—they’ve been my number one employer for more than 15 years,” says Thomas. “Halfway through the program, I was elected to Council, and I think my educational experience with SFU Beedie has allowed me to gain that honour of my people believing in the work that I do. I hope to continue working with my Nation through their amazing opportunities.”