We're in the process of moving this section to our new website. Check out the new SFU Beedie website →
Beedie School of Business > Ideas@Beedie > Student experience in organizing case competitions builds path to managing NASA projects for BBA grad 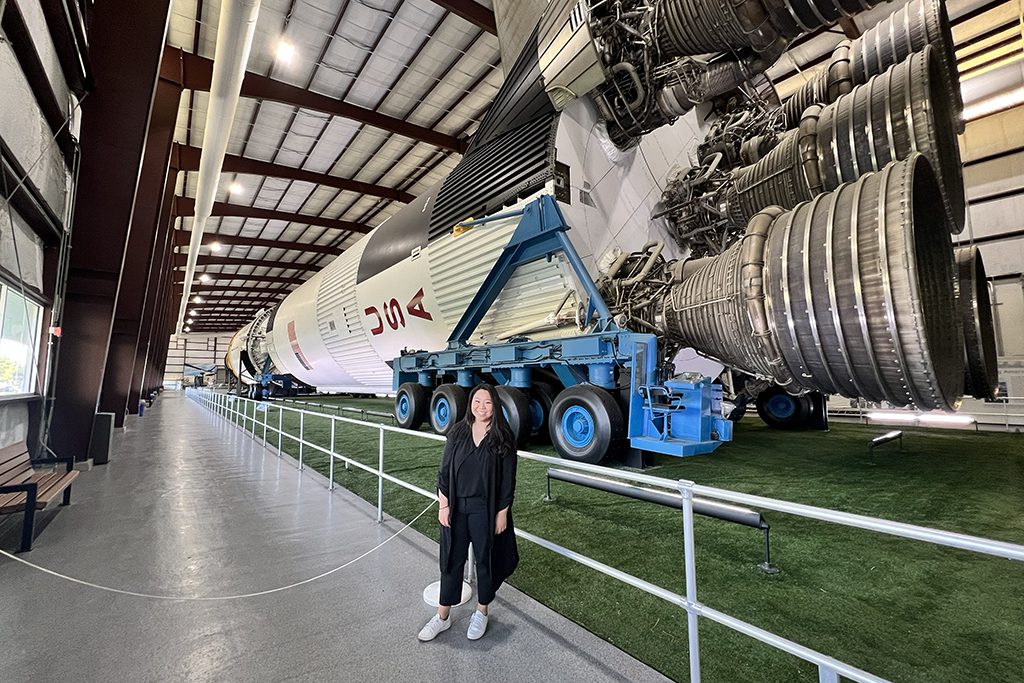 Tiffany Fong at the Johnson Space Centre in Houston, TX.

On day one of her university experience at SFU Beedie, Tiffany Fong felt a little lost. There weren’t many people she knew from high school. She was even considering skipping out on LAUNCH, SFU Beedie’s event for new undergraduate students. But Fong was persuaded to attend, and her experience at LAUNCH launched a lifelong love of event logistics and project management—a passion that would go on to serve her in her career.

After LAUNCH, Fong got involved with various planning committees for the remainder of her degree, organizing numerous events and case competitions, including being a two-time LAUNCH leader and organizing CaseIT five years in a row. She was also heavily involved with organizing JDC West and was a leader in the SFU Beedie mentorship program.

Fong graduated from SFU Beedie in 2017 and discovered a career path as an enterprise project coordinator with a crowdsourcing company, which owns contracts with NASA to manage their Open Innovation Services 2 projects, valued at $175 million USD. Last month, Fong visited the Johnson Space Centre in Houston, TX and got to see everything in person.

“It was incredible to see the home of the Mission Control Centre and the facilities where astronauts train in real life,” says Fong of the experience. “I was very lucky to be able to witness the preparation of the SpaceX Crew-5 docking that was about to happen in a few hours.”

Fong likens the process of managing these contracts to managing case competitions at SFU Beedie, with which she has had ample experience both in a student and staff capacity. When she was handling the logistics of case competitions as part of organizing committees at SFU Beedie, she didn’t expect it to directly translate into a career path in managing similar projects for NASA.

“I never thought of event logistics planning as a career path,” says Fong, who majored in human resources and marketing. “The moment I graduated, I was being evaluated as an adult rather than as a student. My job competitors weren’t just other students—they were the entire workforce, including very experienced professionals. So, it’s incredibly important to get some experience under your belt, whether it’s through co-op or something else.”

Fong did two co-op terms, which turned into a one-year contract position, at SFU Beedie. A member of SFU Beedie’s staff, with whom Fong had worked closely during LAUNCH planning, called her up and offered her a co-op role at SFU Beedie. She got to work with the school’s staff at the Career Management Centre as a program assistant, and later as a student engagement coordinator.

Fong credits her involvement with extracurriculars at SFU to helping her open up to opportunities and new experiences, and to embrace stepping out of her comfort zone. She is now working on getting her PMP certification and has embraced a career in project management.

“Being part of the behind-the-scenes was the perfect way for me to still participate without being in the spotlight,” says Fong. “At SFU Beedie, there’s a place for everyone.”