The Economist: Samba management and Beedie 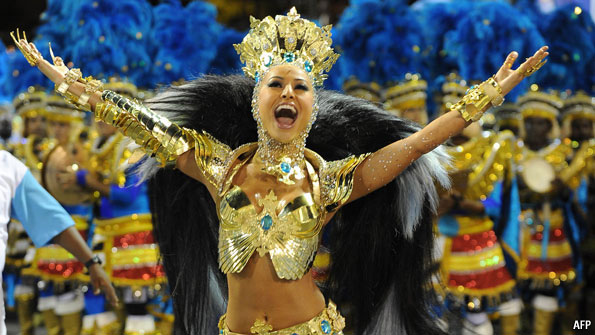 The following article was published by The Economist on January 3, 2012 as part of their ongoing coverage of global business education.

WILL Brazil become a new source of inspiration for Western business schools? For the past fifteen years, they have mainly looked east. New business schools grew up in such fast-growing countries as China and Singapore, leading to a stream of student and faculty exchanges between Western and Eastern campuses.

But a growing number of business schools are now looking south, with Brazil attracting most interest. The University of Virginia’s Darden School of Business recently introduced a Brazilian residency as part of its Global Executive MBA (GEMBA). Students will go to São Paulo and Rio de Janeiro where they will spend two weeks attending classes, visiting local firms and learning about the region’s business environment. And Canada’s Beedie School of Business at Simon Fraser University has joined forces with São Paulo’s FIA Business School, Mexico City’s ITAM and Nashville’s Vanderbilt University to develop what officials call an “Executive MBA programme for the Americas”.

The flurry of activity may not come as a surprise. Last year Brazil overtook Britain to become the world’s sixth-biggest economy, according to the Centre for Economics and Business Research. Yet despite the country’s recent success and its wealth of natural resources, the story of the Brazilian economy in the second half of the twentieth century was one of underachievement. The longstanding joke is that Brazil is a country of the future—and always will be. Beyond political instability, observers point to decades of corporate mismanagement and a lack of strategies to maintain growth.

But the country is the destination of choice for multinationals looking for a foothold in Latin America. It also boasts a sophisticated technology sector, enough oil, crops and breweries to be self-sufficient. And it has been chosen to host the world’s two biggest sporting events in the next four years: the World Cup and the Olympic games. Add to that a growing middle class, and the economy should have a promising future.

Will foreign business schools be able to influence the country’s executives, given Brazil’s historic tendency to be inward-looking and resistant to outside ideas? For it to keep growing, managers need to change their mindset, says Peter Rodriguez, senior associate dean at the Darden School of Business. And this is happening, he explains, as Brazil’s economy is moving away from family-based firms towards more professionally managed companies. Increasingly, it is no longer lineage, social connections and good fortune that will get you ahead.

Local firms are also keen to use business education to learn from recent failures in rich countries, notes Cesar Beltran, IESE Business School’s Brazil director. “In this time of rapid growth they don’t want to lose sight of the long-term picture for the sake of short term gain,” he says. Mr Beltra also argues that more and more Brazilian companies want their managers to think globally.

Marina Heck, of the OneMBA program at Brazil’s FGV Business School, sees this as part of a wider trend of companies investing more in their management talent. In Brazil the war for talent is still raging. As a result, almost 90% of the students enrolled in the OneMBA programme are funded by their companies (in America and Europe the share is about a third). And whereas in rich countries the number of those who want to get an MBA has fallen in the past two years, applications to the OneMBA programme at FGV have doubled over the same period.

For students coming from outside the country, Brazil offers lessons that stand apart from those that can be learned in other BRIC nations, such as India and China. Darden GEMBA students, for example, get the opportunity to study Rio’s Carnival—and understand how such a major international event can rise out of the poverty-stricken favelas.

Though the world’s biggest popular gathering may look like a spontaneous street party, it is also the result of months of intense practice, meticulous choreography and people management on a massive scale. Such “Samba management”, a combination of the fun and formal, may be a model for the world.

See the full article at The Economist at: http://www.economist.com/whichmba/samba-management