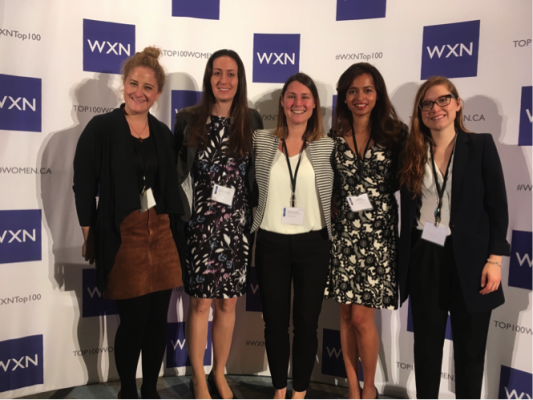 In January 2017, members of the GBWC had the opportunity to attend the Women’s Executive Network’s Top 100 Women’s Leadership Summit at the Fairmont Pan Pacific. The event involved a number of inspiring keynote speakers, presentation of this year’s Top 100 Award winners, and a delicious lunch!

The Top 100 Awards were launched back in 2003 and celebrate the accomplishments of Canada’s leading female executives who have paved the way in empowering women in leadership roles. Past Award Winners are some of Canada’s most iconic women including: Margaret Atwood (Best-selling author), Arlene Dickinson (CEO, Venture Communications and CBC’s Dragon’s Den star), Michaëlle Jean (former Governor General of Canada); and Heather Reisman (Founder and CEO, Indigo Books & Music).

During the event, we had the opportunity to hear from past and present WXN Top 100 winners including: Marta Mulkins (Commander, Naval Reserve), Charlene Ripley (Executive Vice President, General Counsel, Goldcorp Inc), and Natalie Dakers, (President & CEO, Accel-Rx Health Sciences Accelerator). These women gave inspiring speeches about being trail blazers in their fields. For example, Cmdre Mulkins was the first women to command a warship in the Royal Canadian Navy and has since assumed command of all 24 naval reserves and 3,200 personnel located across Canada.

Thank you to SFU for support us in attending this amazing event!