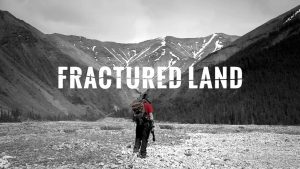 On an unusually cold and snowy December 5th, Net Impact welcomed co-director Fiona Rayher to the Segal Graduate School of Business to screen her film, Fractured Land, to an audience of MBA and EMBA Indigenous Business Leadership students. Fractured Land, winner of awards from the Edmonton International Film Festival, Vancouver International Film Festival, and HotDocs, documents the coming-of-age of Caleb Behn, a young Dene lawyer, for over four years from his days as a law-school student, to outspoken advocate and leader on issues of First Nation rights related specifically to the extractive energy industries of Northeastern British Columbia. 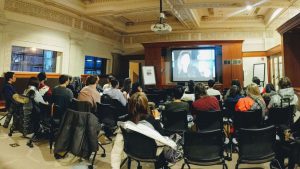 Fractured Land is moving and beautifully shot highlighting the natural beauty and wonder of British Columbia, whilst simultaneously exposing the sheer breadth and scope of the impactful nature of hydraulic fracturing and energy development on the natural environment. The film is especially powerful in its relatability to recent major events across Canada and the United States, such as 2016 marking a Year of Reconciliation, the protests at the Dakota Access Pipeline, and the major announcement only last week of the approval of the expansion of the Trans-Mountain Pipeline.

For those who have lived and worked their lives in the Lower Mainland of British Columbia, or from outside of the province, they may not be aware of the industries of northeastern BC and the interplay between First Nations groups and the oil and gas companies operating there. Fractured Land resonated strongly with me as although I originally hail from Toronto, Ontario, I worked for an environmental engineering and consulting firm in Fort St. John, the hub of the energy industry in Northeastern BC since May 2014 prior to joining the MBA program at Simon Fraser University.

Working intimately with Treaty 8 First Nations groups an archaeologist, and even with members from Caleb’s nation, Moberly Lake, I worked to protect First Nation’s cultural heritage by conducting archaeological impact assessments of major oil and gas developments, such as pipelines and right of ways, that would cut through their territorial lands. One theme that stuck out in particular from the film that I experienced first-hand was the desire to protect our environmental landscape, but the inability to do so and even the necessity to participate in its harm as a means of employment. Like the struggles of many of the individuals in the film, as much as I wanted to protect the natural beauty of the north, I knew that I was simply a means for its eventual destruction and degradation through what would almost most certainly be the approval of a major energy project. Internally, I may have been opposed to the destruction still to come, but at that moment, I needed the employment to survive.

It was through the screening of Fractured Land that the Net Impact team wanted to help inform and expose the graduate students to the issues First Nation groups within BC face and to the impacts the energy companies have on the natural environment. One of the most rewarding comments from the audience as the film ended was simply “I had no idea this was taking part in BC, but now I know.” Moving forward, now that you know, what are you going to do?